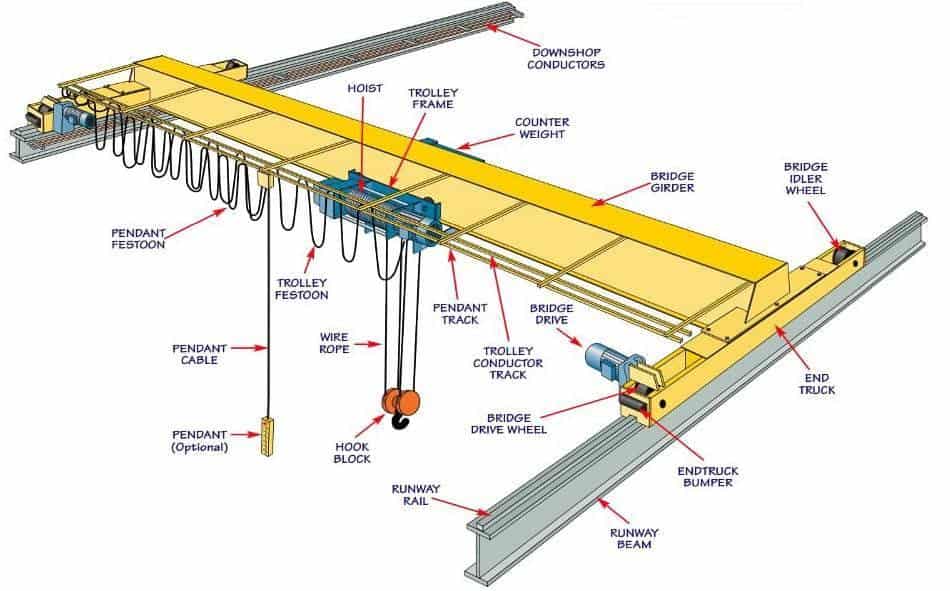 In this article, we will discuss the gantry girder.

In a manufacturing plant, it is essential to keep an overhead traveling crane to transfer heavy parts of machines from one end to another end.

The motion of the load is 3D. The crane is required to raise huge mass vertically and horizontally, similarly, the crane with load is required to transport along the length of the shed. The cranes available in the market are either hand-or-electrically run. The crane moves on the rails which are at its ends. The rails used on a girder are known as gantry girders.

The gantry girder length over gantry columns. If the ability of the crane is average, the gantry girders rest on brackets connected to the roof column of the industrial shed.

Gantry girders or crane girders convey hand-run or electrically run overhead cranes to industrial buildings such as factories, workshops, steelworks, etc. to raise huge materials, equipment, etc., and to carry them from one end to the other end, within the building. 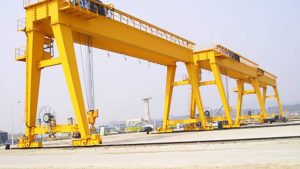 The gantry girders are girders that hold the loads that are carried through the moving wheels of the crane. The crane girder length from column to column does not own any lateral support at the moderate points except when a walkway is made at the top of the girder. The gantry girder lengths between the brackets attached to columns, may either be made of steel or reinforced concrete.

The following are gantry cranes types used in construction,

Gantry girder, having no lateral support in its length (laterally supported) has to resist the following loads,

a. Vertical Loads From Crane

b. Impact Load From Crane

The stresses produced in gantry girders due to the overhead loads are more than those pretentious by slightly given loads. This is due to the forces produced by the unexpected use of brakes to smoothly transport loaded cranes acceleration, retardation, vibration, the feasible slip of slings, etc.

The steelwork which carries these fast working cranes must be weighty than the steelwork which holds the slow-moving cranes. With fast working electric overhead traveling (E.O.T) cranes, the stresses in the gantry girders are produced nearly at once, whereas, with slow transporting hand-operated cranes, the bending stresses in the girder are produced slightly from zero up to their highest values.

For example, in the direction of the gantry girder, the force is called Braking Force or Drag Force. This force is considered to be equal to 5% of the static wheel loads for the electrically run cranes or hand run cranes.

Lateral forces on crane girders may be convinced by the,

A) Lateral forces are caused due to the sudden starting or stopping of the crab when moving over the crane girder.

In the longitudinal gantry girders, the frictional resistance of the rail is transferred into the crab girders and from it into the crosshead girders, hence, as point loads through the major wheels, into the top or compression flanges of the gantry girders.

B) Lateral forces occur when the crane is pulling weights across the floor.

The crane is usually appropriate to pull weights across the floor. If the load is huge, it is attached on rollers, and transported on a timber plank track. The lateral thrust and pull on the compressive flanges of the gantry girders, so, result in a matter of guesses. The resisting forces are, mainly the friction of the many wheels moving upon the gantry rails.

Then the forces are provided by the flanges of the major wheels bearing against the gantry rails. The lateral thrust is used to work in the plane of the center of gravity of the upper flange. As it does at the rail level, it has a lever arm producing torque.

This short lever member and, therefore, the torque are neglected. No support is accepted to be provided by the lower or tensile flange in resisting lateral thrust. Nevertheless, should this be done, then the torque due to the thrust increases by the distance from the line of action of the thrust to the Neutral Axis? 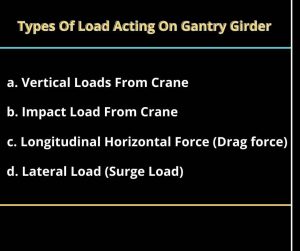 The uses of the gantry girder are as follows:

a. To know the behavior of gantry girders.

b. To determine the various loads working on the gantry girder.

c. To determine the maximum bending moment and maximum shear force presence in the girders.

e. To prepare the best attachments.

The characteristics of gantry girders are as follows:

a. The preparation of the gantry girder is a unique example of a laterally baseless beam.

b. It is loaded in addition to vertical loads and horizontal loads along and perpendicular to its axis.

The first process is to calculate the maximum wheel load of the crane girder transmitted to the gantry girder.

Concentrated load = weight raised by hook + heaviness of the trolley

Load on each wheel = Maximum reaction divided by 2.

This wheel load is raised by 25% for impact and then factored in.

The Shear Force due to the wheel load is ultimate when one of the wheels is at the position of support.

Drag force is taken equal to 5% of the static wheel load on each gantry girder. This load is factored in.

Surge load = 10% of (weight lifted on hook + weight of crab) For one crane this load is transmitted by four wheels.

Surge load on each wheel = Total surge load divided by 4.

This load is factored in.

The following steps are considered.

The moment capacity for vertical loads must be around 40 to 50% higher (k = 1.4 to 1.5) than the moment due to vertical loads so that the section can withstand both horizontal and vertical moments carefully.

5. Determine the Izz, Iyy, and Zp of the trial section choose

Md should be greater than Mu. The top flange should be tested for bending in both axes utilizing the interaction equation.

When the gantry girder is laterally not held, the design bending strength of the beam is provided by,

Md should be more than Mu.

At points of concentrated load, the web of the girder must be reviewed for local buckling and, if essential, load-carrying stiffeners must be kept to save local buckling of the web.

Weld is required to connect the section to the top flange of the T-beam.

For Electric overhead traveling crane up to 500 KN ability,