The tri-axial shear test is a commonly adopted soil test as the test is suitable for all types of soil.

This test was first developed by Casagrande to overcome the drawbacks of the direct shear test.

The triaxial shear test is more versatile and the drainage conditions can also be well controlled.

Triaxial shear test on soil includes the process of subjecting the soil sample to stress such that the stress resulted in one direction will be different in perpendicular direction.

1. Triaxial Testing Machine:
The triaxial testing machine must be complete with a tri-axial cell.

The tri-axial testing machine consists of units that have the provision of inserting a cylindrical soil sample that is enclosed by rubber membranes to restrict the entry of lateral fluid.

A piston arrangement is also provided to apply the vertical stress and radial fluid pressure.

A drainage arrangement is also made to prevent the drainage of the specimen.

A pressure gauge is also provided for measuring the fluid pressure in the cell.

A dial gauge is generally provided for the measurement of the deformation of the specimen. Load application is measured by proving.

3. The procedure of Triaxial Shear Test

The test procedure of the triaxial shear strength of soil can be divided into three main types which are explained as follows:

In the unconsolidated undrained shear test, the sample of soil is subjected to pressure without any drainage provisions.

The pressure in the cell is maintained at a constant value.

The deviator stress is applied and increased rapidly until failure of the specimen occurs.

The unconsolidated undrained test is commonly known as the quick test.

Unlike the unconsolidated undrained test, in this test, the sample is subjected to pressure with appropriate drainage provisions.

The deviator stress is continuously applied while keeping the cell pressure constant with no further arrangement for drainage.

In the consolidated drained test, the deviator stress is increased while facilitating the drainage.

It must be noted that the rate of loading is slow to prevent the development of excess pore pressure within the sample.

The method includes enclosing the membrane in an envelope and positioning it in the tri-axial cell.

Then, the lateral pressure is applied and the vertical deformations and load readings are duly recorded.

Mohr’s rupture envelope is obtained by drawing the tangent to the circles obtained.

The tangent will intercept at the y-axis.

The y-intercept will give the value of cohesion (C).

The slope of the failure plane or the tangent line will give the angle of internal friction of the soil ( ø).

The loading can increase the cross-section of the soil specimen.

This will require a correction for the deviatoric stress

Here, the correction is applied by assuming that the volume of the specimen remains constant and the area varied.

The corrected deviatoric stress is

l = deformation of the specimen 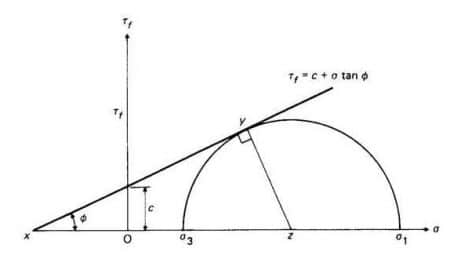 Then, Mohr’s circle is plotted and shear stress is calculated as follows:

The shear resistance of the sample is given by:

Some of the advantages of the triaxial shear test on soil can be listed as follows:

1. This test allows the specimen to fail on the weakest plane.

2. The stress distribution on the plane of failure is uniform.

3. The drainage conditions can be controlled.

4. The changes in the pore pressure, as well as the volumetric changes, can be directly measured.

5. The Mohr’s circle can be drawn for any shear condition and stage.

6. This test is suitable for all types of soil and it is highly desirable for research works.

Some of the disadvantages of the triaxial shear test on soil can be listed as follows:

1. The strain conditions are generally not uniform.

2. The consolidation of the soil sample in the test is isotropic but in actual practice it is anisotropic.